"Whenever it is that they are saying, “Peace and security!” then sudden destruction is to be instantly on them, just like birth pains on a pregnant woman, and they will by no means escape" 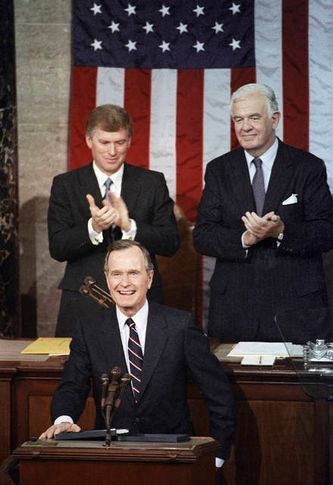 The New World OrderMarch 6, 1991: This speech accompanied by many standing ovations, it was clearly an atmosphere of a religious patriotic celebration, to the glory of the "king", his nation and his army

After his overwhelming victory over Saddam Hussein (Iraqi President, at that time), President Bush (Father) (President of the United States at that time), made a speech with a strong biblical accent, before the American Congress using the expression "The New World Order", a few months before, on September 11, 1990. The international context of this "New Order" was the fall of the Berlin Wall in November 1989 and the imminent end of the Soviet Empire which would finally take place on December 26, 1991. This speech (of September 11, 1990), laid the foundations for a new international relationship in the aftermath of the imminent end of the Cold War. This speech was presented before the American Congress, during the period of the first Gulf War (from August 2, 1990 to February 28, 1991). After the victory of the United States with the coalition of the 32 other countries, over Iraq, President Bush (father) delivered the State of the Union speech on March 6, 1991, which celebrated the victory . He repeated this expression of "new world order" of peace, security, freedom and respect for the law (You can see it, on the link: The Speech of President Bush, March 6, 1991).

The State of the Union Speech, presented by the President of the United States, on March 6, 1991, is a true celebration of the victory of the United States and the 32 other countries, over the 'Iraq. In this speech, which was repeatedly applauded with standing ovations, President Bush (Father) outlined in four main points the international framework of this "New World Order" of peace, repeating the previous speech of September 11, 1990. These objectives of world peace made particular reference to the Middle East and the Persian Gulf; a goal of world peace by controlling the proliferation of weapons and not only by the army force, but also by diplomacy; an objective of world peace by economic aid. The second part of the speech is a true celebration of the greatness of the United States and its army, to establish peace and security in this world. This half hour of speech, is a clear proclamation of victory, and peace and security, symbolized by the beginning of a "New World Order", of which the United States would be the guarantor.

It was impossible that such a speech could have been considered harmless, from the point of view of God (In viewing this speech accompanied by many standing ovations, it was clearly an atmosphere of a religious patriotic celebration, to the glory of the "king", his nation and his army). The Bible also talks about a king who was praised for his speech, without giving glory to God. It is about king Herod: "But on a set day Herod clothed himself with royal raiment and sat down upon the judgment seat and began giving them a public address. In turn the assembled people began shouting: “A god’s voice, and not a man’s!” Instantly the angel of Jehovah struck him, because he did not give the glory to God” (Acts 12:21-23).

Jehovah God has established his son Jesus Christ as King in heaven to rule the earth, since 1914 (Revelation 12:10a). According to Psalm 2, the current nations have completely ignored this divine decision, they have despised his established King. And in the 77th year of the heavenly reign of Christ, on March 6, 1991, the human "king", of the first current world power, is praised in place of King Jesus Christ, his "kingdom" and his army, in place of the Kingdom of God. It was impossible that God and his Son Jesus Christ could ignore this situation. But unwittingly, he only inaugurated a "new world order" of political and religious self-destruction, as the first fulfillment of 1 Thessalonians 5:3. And as such he became a "false prophet" (Revelation 1613).

If it seems obvious that this prophecy will find its fulfillment (1 Thessalonians 5: 3), just before the Great Tribulation, it had a first worldwide fulfillment on March 6, 1991, after the famous speech of President George Bush (Father).

Indeed, as of this inaugural speech of March 6, 1991, regarding this "new world order" and this Peace and Security, we came into a devilish New World Order of barbarism and of the general liquefaction of human sovereignty on earth ( 1 Thessalonians 5: 3). The beginning of this period seems to correspond to the description of Jesus Christ in Matthew 24:29, but also in the conclusion of the prophecy of Daniel 11: 44-12: 1, of the two kings.

The beginning of this period represents the beginning of the destruction of Babylon the Great, mentioned in Revelation 14: 6 and Revelation chapters 17, 18 and 19: 1-3. The fulfillment of this prophecy is directly connected with Revelation chapter 13, where we find the mention of the number 666. It is a very precise point of reference which allows to know when we came into this last period, which began in early 1991, inaugurated by the speech on the new world order. This number 666 is a landmark that lets us know when Jehovah God put in the heart of the image of the wild beast, the idea of ​​starting to destroy Babylon the Great, the world's political and religious sovereignty. But how did God put it in the heart of the beast to destroy Babylon the Great?

GOD PUT IT INTO THEIR HEARTS TO CARRY OUT HIS THOUGHT 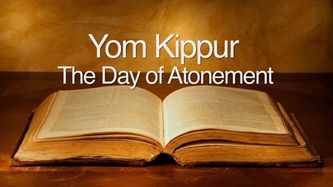 "And they try to heal the breakdown of my people lightly, saying, ‘There is peace! There is peace!’ When there is no peace (Jeremiah 6:14)

After serious biblical analysis, we know that the Great Tribulation will take place on a Ethanim, 10 (Tishri) (biblical month). The question is: Who are the humans who regularly claim "Peace and Security" especially in their relationship with God? This date is the celebration of Yom Kippur, the Day of Forgiveness, or of Peace and Security with God. While a fringe of humanity will proclaim "Forgiveness", "Peace and Security", there will be no peace, but a judgment, followed by destruction:

“For God put it into their hearts to carry out his thought, yes, to carry out their one thought by giving their kingdom to the wild beast, until the words of God will have been accomplished” 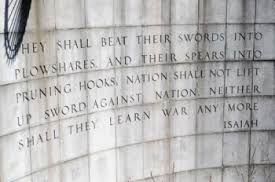 The United Nations is using the Bible as Patriotic Propaganda of the Worldwide Peaceful Human Sovereignty On Earth: "And he will certainly render judgment among the nations and set matters straight respecting many peoples. And they will have to beat their swords into plowshares and their spears into pruning shears. Nation will not lift up sword against nation, neither will they learn war anymore" (Isaiah 2:4).

The Good News of the Kingdom of God, written in the Bible, is the Tool by means “God put it into their hearts to carry out his thought”. And we saw how the Bible symbolically described the powerful human prophet in Revelation 13:14-18 and Daniel 11:41-43, he has been imagining to “fulfill” God purpose in the Restoration of Israel, particularly since 1948. Who mainly did decide the destruction of Iraq (Babylon) of January 17th, 1991, “Operation Desert Storm”? The leader as representation of the prophet: President George Herbert Walker Bush (1989-1993). 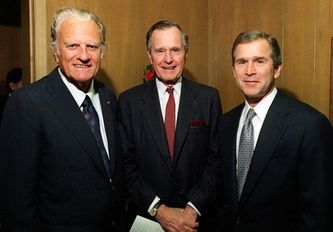 Just before the beginning of the First Gulf War, that he considered as a Crusade War, he consulted his religious mentor, Billy Graham (left)

What was the religion of this American political leader? Protestant Episcopal Church in the United States of America. On Wikipedia (French version), it is written, just before the beginning of the First Gulf War, that he considered as a Crusade War, he consulted his religious mentor, Billy Graham. Who is Billy Graham? “William Franklin "Billy" Graham, Jr., KBE (born November 7, 1918) is an American evangelical Christian evangelist, ordained as a Southern Baptist minister, who rose to celebrity status in 1949 reaching a core constituency of middle-class, moderately conservative Protestants” (Wikipedia Billy Graham). This man has been a “preacher” and spiritual mentor for some American Presidents : “A new book by Time Magazine editors Nancy Gibbs and Michael Duffy, The Preacher and the Presidents: Billy Graham in the White House (Center Street, August 2007) tells the story of an extraordinary private ministry to America's most powerful political leaders. 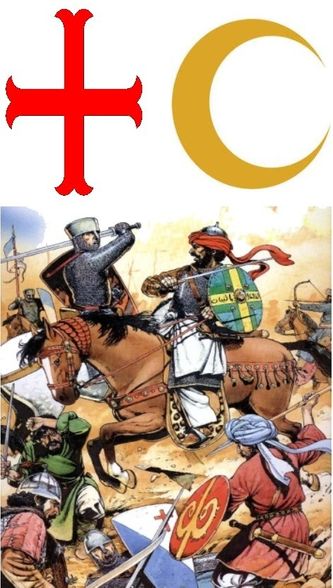 The three main political and religious groups that kill each other are "messianic": "militarized" Christian Zionist, Judaic Zionist and Muslim Jihadist

Jehovah God primarily used his Son Jesus Christ, the Word, to literally implode the current worldwide human sovereignty (John 1:1-3 "Jesus Christ: the Word of God"). Since the beginning of 1991, this liquefaction of the whole human system of things has been accentuated. The three main political and religious groups that kill each other are "messianic": "militarized" Christian Zionist, Judaic Zionist and Muslim jihadist.

Thus, at the very beginning of his ministry of preaching the Good News, the prophetic words of Christ currently have a worldwide resonance: "Everyone, then, who acknowledges me before men, I will also acknowledge him before my Father who is in the heavens. But whoever disowns me before men, I will also disown him before my Father who is in the heavens. Do not think I came to bring peace to the earth; I came to bring, not peace, but a sword. For I came to cause division, with a man against his father, and a daughter against her mother, and a daughter-in-law against her mother-in-law. Indeed, a man’s enemies will be those of his own household" (Matthew 10:32-36). As we see, Jesus Christ uses the Good News to comfort the poor, but also, to destroy spiritually, the unity of the worldwide sovereignty (Matthew 11:5; The plagues of the seven trumpets and the seven bowls, of the book of Revelation, show the spiritual damage caused by the worldwide preaching of the Good News, against the unrighteous human system, before the end (Matthew 24:14)) (THE SIGN OF THE END). This preaching has been heard by the militarized kings of the earth (Acts 9:15).