The judgment of the unrighteous 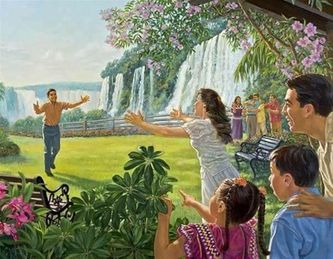 A human body without defect

The first question is: Will the resurrected people inherit a sinless human body? On the biblical basis the answer is: Yes, they will. By the application of the ransom value of the Sacrifice of Jesus Christ. Jehovah God will give  a sinless body to the earthly resurrected people as the result of the exchange allowed by the the Ransom. The human body will be without sin or physical or mental defect to every earthly resurrected people: "Just as the Son of man came, not to be ministered to, but to minister and to give his life as a ransom in exchange for many" (Matthew 20: 28).

Concretely, a human who will have died of old age or illness, will not be resurrected with the after-effects that have caused his death. An old person (after his death) will not be resuscitated in his old age that caused his death, he will get a young and energetic human body. A sick person who died as a result of his illness and a person who died with his physical or mental disabilities, will be resurrected with a flawless body. The gift of life that Jehovah God will make through His Son Jesus Christ will be without defect, without blemish: "Every good gift and every perfect present is from above, coming down from the Father of the celestial lights, who does not vary or change like the shifting shadows" (James 1:17). The "does not vary or change like the shifting shadows", means a permanent zenith of the sun regarding Jehovah's Gift (In that case the Life by Resurrection). Which means that when Jehovah God "gives", He is always at the zenith or at the maximum of quality. It is therefore evident that Jehovah will give to the resurrected a human body without physical or mental defect. But how can we explain this biblical quote from the book of Revelation?

"And he showed me a river of water of life, clear as crystal, flowing out from the throne of God and of the Lamb down the middle of its main street. On both sides of the river were trees of life producing 12 crops of fruit, yielding their fruit each month. And the leaves of the trees were for the healing of the nations"

It seems to be a progressive healing of humanity from diseases during the millennium reign of Jesus Christ. The healing of nations will be applied to the Great Crowd of humanity that will survive the Great Tribulation, which will be healed of the after-effects of Adam's inherited sin, of aging through rejuvenation, and the healing of physical or mental disabilities:

"At that time the eyes of the blind will be opened, And the ears of the deaf will be unstopped. At that time the lame will leap like the deer, And the tongue of the speechless will shout for joy. For waters will burst forth in the wilderness, And streams in the desert plain" (Isaiah 35: 5,6).

According to Zechariah 13: 8, the third part of the current humanity who will "come out" of the Great Tribulation will have these blessings: "And in all the land,” declares Jehovah,

“Two parts in it will be cut off and perish; And the third part will be left remaining in it"  (Zechariah 13: 8). "After this I saw, and look! a great crowd, which no man was able to number, out of all nations and tribes and peoples and tongues, standing before the throne and before the Lamb, dressed in white robes; and there were palm branches in their hands. (...) So right away I said to him: “My lord, you are the one who knows.” And he said to me: “These are the ones who come out of the great tribulation, and they have washed their robes and made them white in the blood of the Lamb" (Revelation 7:9,14).

And the gradual resurrection of all mankind during the thousand years will also be a "healing" of the nations: "With that I heard a loud voice from the throne say: “Look! The tent of God is with mankind, and he will reside with them, and they will be his people. And God himself will be with them. 4 And he will wipe out every tear from their eyes, and death will be no more, neither will mourning nor outcry nor pain be anymore. The former things have passed away”" (Revelation 21: 3,4).

So that it can be reaffirmed that humans cured of their aging and their disability or illness, will be instantly healed. And the earthly risen ones will receive a human body without physical or mental defect (James 1: 17 compare with Matthew 15: 30,31). 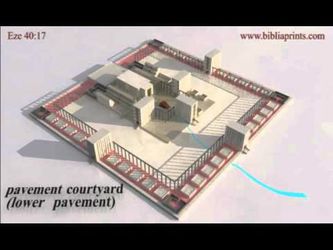 And in the event that they have a sinless body, how will it be compatible with the fact that during the thousand years many Unrighteous Resurrected People will commit errors or unintentional sins without dying?

"For the wages sin pays is death" (Romans 6:23). In Ezekiel 40:20, it is written that the "inexperienced" resurrected ones will make "mistakes": "That is what you will do on the seventh day of the month because of anyone who sins by mistake or through ignorance; and you are to make atonement for the temple" (Ezekiel 45:20). Could such sins or errors (even if unintentional) reignite a deadly process, as was the case for Adam and his offspring (Romans 5:12)? The Bible suggests that this will not be the case, especially in Isaiah 65:20: "For anyone who dies at a hundred will be considered a mere boy, And the sinner will be cursed, even though he is a hundred years of age". This text shows that unrighteous resurrected people who won't want to apply to the laws of God, or decide to willingly sin, after a long time of a hundred years, he "will die being a young boy". This shows that his own sins would not have any physical impact on his human body to the point that it will be necessary to "curse" him. Doesn't that contradict Romans 6:23?

In cross-referencing the information of the prophecy of Ezekiel 45:20 and Revelation 20: 5 it can be said that the divine legal framework will allow this situation. How? In Revelation 20: 5 it is written, "The rest of the dead did not come to life until the 1,000 years were ended" This text means that all the earthly resurrected people will be considered "resurrected" or "existing", from the Divine point of view, at the end of a thousand years. And until the end of the thousand years, from the divine point of view, they won't exist. This explains the strange detail of Ezekiel 45:20: "That is what you will do on the seventh day of the month because of anyone who sins by mistake or through ignorance; and you are to make atonement for the temple". This biblical quote gives an information that is both strange but also can be understood by the information in Revelation 20: 5, which shows that all the earthly resurrected people won't "exist" as "global group" from the divine point of view, during the reign the thousand years. Indeed, it is written in Ezekiel that for an "error of an inexperienced" it will be made atonement, not for the sinner, but for the "Temple". Why ? Because this (resurrected) people will not have an official existence from God's point of view, but his very real sin will fall back on the humans that are serving in the Temple. Why ? Because, from God's point of view, The Great Crowd will exist to have survived the Great Tribulation.

Moreover, as in the night when the angel passed over the houses having the blood of the Lamb on the doorpost, the prophecy of Ezekiel symbolically mentions this act: "And the priest must take some of the blood of the sin offering and put it upon the doorpost of the House and upon the four corners of the surrounding ledge belonging to the altar and upon the doorpost of the gate of the inner courtyard" (Ezekiel 45:19). This atonement is made on Nisan, 1. This demonstrates that, from the standpoint of Jehovah God and Jesus Christ, the Great Crowd will have the status of the firstborn of all the righteous people of the world who will be resurrected.

Indeed, according to Revelation 7: 9-17 and Ezekiel 40-48, the Great Crowd will have the status of "Levite" or member of the Temple who serve God in the Temple by a sacred service day and night. And therefore, any very real sin committed by a resurrected person who does not legally exist will automatically fall back upon the legally existing humanity, the members of the Temple. An annual atonement, based on the Blood of Christ, will be made for all "errors" or sins committed by the inexperienced resurrected, in the seventh month, that is, every 10 Tishri: "And the heaven departed as a scroll that is being rolled up, and every mountain and every island was removed from its place. Then the kings of the earth, the high officials, the military commanders, the rich, the strong, every slave, and every free person hid in the caves and among the rocks of the mountains" (Revelation 7:14,15).

This atonement, this time, will be on the basis of the blood of Christ, in Nisan, 1 and Nisan, 7, after which, in Nisan, 14, the commemoration of the death of Jesus Christ will be celebrated (Ezekiel 45:18-21). Based on the above explanations, when Adam and Eve sinned, the death sentence announced by God (if they disobeyed) (Genesis 2:15-17), came into effect not immediately after their act of disobedience, but after God's acknowledgment of their guilt and the divine declaration of condemnatory judgment (Genesis chapter 3:1-7 (the sequence of the story of Adam and Eve's disobedience) 3:8-19 (the hearing, judgment and divine declaration of condemnation of Adam and Eve)) (Romans 5:12). The deadly effect of sin came into action after the divine expression, through His Word of the condemnation of the two sinners (Isaiah 55:11).